The MANformation Blueprint To SUPREME CONFIDENCE

33 Powerful Alpha Male Techniques That Skillfully Disarm The Established Leader Of Your Tribe And Quickly Move You Up The Pecking Order Without Being Combative, Arrogant, Or Cocky 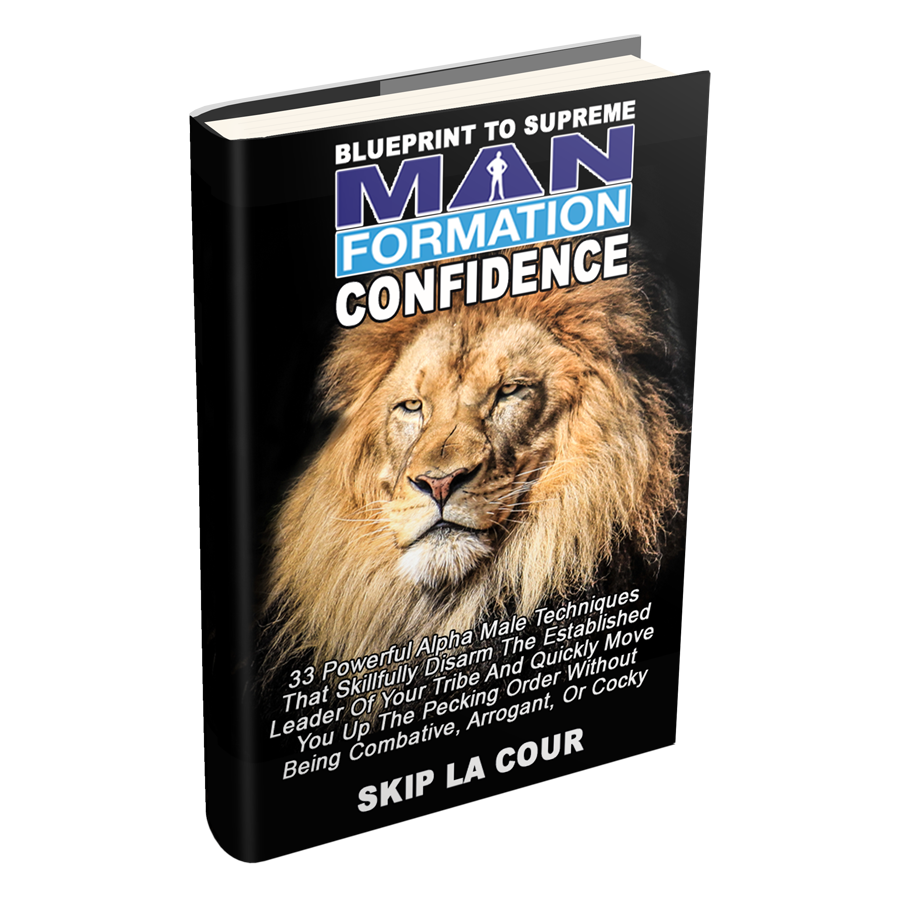 The Law of the Jungle

It’s survival of the fittest among every group of animals in the jungle.

The strongest and most dominant animals in the group are rewarded with the very best options.

The weaker and less dominant animals in the group are forced to settle for what’s left.

Make no mistake about it, the same human social dynamics take place among every group of men in every city across the world; every culture; every social circle; every age range; every single day; and in even more obvious and not-so-obvious ways.

From the boardroom to the crime infested street corner in the ghetto, men are seizing, outwitting, outworking, negotiating, assuming, fighting for, settling for, and even surrendering their pecking order placement among their own peer groups.

The game is always in play–even if you don’t realize there is a game going on. Your success or failure is just in someone else’s hands.

The game is always in play–even if don’t want to play in it. Someone else will just tell you where you placed.

Power, influence, and persuasion skills among men are the foremost characteristics and qualities of the true Alpha Male and are very similar to those demonstrated in a pride of lions.

Where do you currently rank in your “pride” and how badly do you want to improve your position?

How much have you really thought about this until now?

Enter your name and valid email address and, within a couple of minutes, you’ll click the link in the confirmation email and your FREE copy of The MANformation Blueprint To SUPREME CONFIDENCE will be IMMEDIATELY emailed to you.

Check your SPAM folder if you don’t see it.

Here’s what men who are hungry for MORE in life just like you have to say about this ebook . . .

“I had the incredible opportunity to read and experience Skip La Cour’s The Manformation Blueprint To SUPREME CONFIDENCE. My initial reaction was immediate surprise in how applicable these strategies are in numerous scenarios. For my career I have been able to utilize many of the 33 Powerful Alpha Male Techniques for establishing my dominant position in projects and important meetings. Even beyond the professional landscape I have mindfully applied these constructive blueprints for how I conduct myself to ensure I continuously develop as a walking talking cornerstone in all settings. I cannot recommend strongly enough the countless benefits in Skip’s Manformation programs. He shares his valuable insight and experience along with effective and proven strategies for maximizing your potential as an Alpha Leader!”

“As an advisor, people look to me for guidance in making the most important decisions of their lives. While providing this guidance, it’s equally important to relay the correct information in the correct manner. Skip La Cour’s MANformation helped me to understand the subtle cues that my body language relays. Controlling these cues allows me to deliver my message with the confidence my clients expect from their professional.”

“I enjoyed this great guide and was immediately inspired to pay more attention to the ways I managed my interactions with other men. The descriptions matched my own experiences and provided me with valuable insights. As a result of reading the ebook, I feel more encouraged in my power to respond effectively to power games that are constantly in motion. I will continue to apply these strategies and come to these crucial situations well-prepared- and for that I am very thankful.”

“Skip has outlined 33 POWERFUL strategies that anyone can apply to IMMEDIATELY improve their position in their current social or work group. I would caution the reader to resist the urge to rush to the bold print. There is gravity to each word in this book and the proper application is just as powerful as the strategies themselves. This isn’t a one-time read. It’s an eye opening, emotional gut check to anyone who wants to further assert himself and influence others to happily assist him in his own goals. You can’t read this without reflecting on your own life and social circles. But if you’re willing to be honest with yourself, you’ll find this an invaluable tool in developing confidence and becoming the alpha male in your tribe.”

“The one thing I will point my out as something I just learned is when you say the opposite of love is NOT hate, it’s indifference. That statement has sent my mind into a time warp thinking of ways I could have handled situations differently. If I had this information when I was say 20 where could I be now?”

“Those Disarming Techniques are written so well. I didn’t realise that, as a Mama Bear and Queen, I’m already teaching my son these things. You’ve just put it in words for me.”

“Disarming Technique #3: I find it a little offensive. #3 through #6: It would be better if you reorder them so they don’t seem offensive.”

“I like how you have this worded. Relating everything to an animalistic way of living. It’s how I’ve lived my entire life.”